Aya Gooin’ Down De Mont?* An Oral History of Rock Concerts at Leicester’s De Montfort Hall in the 1970s and 80s

The older I get, the more I thank God that I had a truly fortunate childhood. I had two loving and indulgent parents who raised me in a nice home in a clean, affluent, middle-class suburb of Leicester. All the amenities of a decent-sized city were just a twenty-minute bus ride away.

The jewel in my hometown’s crown, at least to my mind, was The De Montfort Hall, the elegant — some might say too elegant — location for so many defining musical memories from my teenage years. 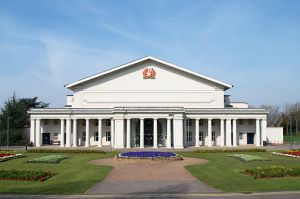 Before telling those stories, however, it might be a good idea to introduce the real star of the show and make the first story one about how the backdrop for so many incredible nights came into existence.

The history of the hall dates back to 1907 and a visit paid to Leicester by the British Association, a group dedicated to the advancement of science. Their decision to hold their 77th annual meeting in the City that year was met with the realization “that Leicester possesses no public building large enough for the purposes of holding the usual conversazione (scientific discussion) and reception of the large number of members and guests anticipated.” (Well, there was The Temperance Hall on Granby Street. But it was … well … a Temperance Hall).

The temporary solution was to build a four-sided loggia–a covered, outdoor corridor similar to a cloister–off the back of the New Walk Museum, where the meetings were to be held, in Museum Square. This wooden structure was taken down after the meeting, though some in the City floated the idea that the whole thing should be dismantled and rebuilt at the top end of New Walk in Victoria Park. But the need for a more permanent building led to the creation of De Montfort Hall (and gave birth to a long-standing Leicester rumor, that I heard from my Dad when I was a kid and have heard repeated since, that the Hall itself was designed as the temporary building).

Built at a cost of £21,000 (a little over £2 million or about $3.3 million in today’s money) by the local architectural firm of Stockdale, Harrison and Sons (who also built Edinburgh’s famed Usher Hall in 1914), the De Montfort Hall was opened on July 21, 1913. In his slim yet informative book Out and About in Leicester, local Leicester historian John Banner has noted that construction of the building was not without its difficulties. The land on which it was built — adjacent to Victoria Park, where the loggia was to have been relocated–was too soft to support regular foundations, and so the whole structure is built on pillars which, Banner argues, could be one of the reasons behind the hall’s rich acoustics.

Stockdale’s design for the hall and grounds has remained unchanged to this day, and the Hall’s gleaming white facade, accented by a portico supported by Doric columns and topped off with a well-proportioned gabled roof, is still one of the iconic images of Leicester. The blood-red coat of arms of the City of Leicester, located just under the eves, creates the sole, subtle pop of color, complementing the blooms in the flower beds that are arranged symmetrically in the ornate gardens in front of the building.

Less than a year after the hall opened, on February 19, 1914, the hall’s enormous 46-pipe organ was presented to “the Mayor and Corporation of Leicester.” Built by local organ builders Stephen Taylor & Sons Ltd., the organ was a gift to the City from Alfred Corah, the wealthy Leicester industrialist and owner of N. Corah and Sons, which was, by then, the largest knitwear company in Europe.

Almost immediately, the hall’s acoustics–enhanced by its foundation pillars, perhaps, but also by its barrel ceiling and clean sight lines–were praised by performers. After her appearance in 1913, Italian soprano superstar Luisa Tetrazzini ranked the De Montfort Hall as one of the three best halls in Britain. (The other two, it should be noted, were in Glasgow and Edinburgh. So that, in Tetrazzini’s opinion, made the hall greater than anything London had to offer at the time.)

As testimony to the Hall’s sound, one need only look at the number of live recordings that were made there. In the rock era alone, Genesis Live (1973); Live! In the Air Age (1977) by Be Bop Deluxe; Marillion’s Real to Reel (1984); Rory Gallagher’s posthumous BBC Sessions (1999); The Sensational Alex Harvey Band’s equally posthumous British Tour ’76 (2004); Rip It Up at The De Montfort (2013) by Leicester’s own Streetwalkers (the post-Family band led by Roger Chapman and Charlie Whitney); and Raw, Rough and Amazing (2015), a 1972 live concert by Don Van Vliet (better known as Captain Beefheart) all featured songs recorded there.

And God only knows how many bootlegs came out of the place.

Thankfully, the sound remains as good now as it did in years past as the interior of the hall, like the exterior, has changed little in the last hundred years. A major renovation in 1994 added removable tiered stall seating, and a second renovation in 2010 provided a much-needed facelift prior to the hall’s centenary.

But describing the history of the hall is a little like writing about hops and barley when you could be having a quick pint before the headliner comes on — it does nothing to convey the magic that emanated from its stage. That’s why I have asked some of my fellow Chissits** to offer up some of their recollections of seeing shows there while we were growing up in the 70s and 80s. So sit back, me duck***, and come down De Mont w’ us ferrabit****.

* Leicester for “Are you going to the concert at the De Montfort Hall?”

** Chissit = resident of Leicester. Said to have been coined by shop owners in the East Coast resort town of Skegness. They were constantly asked the question “Amuchisit?” (“How much is it?”) by Leicester holidaymakers and, legend has it, misheard the phrase as “I’m a Chissit.”

*** Me duck. A Leicester term of endearment, similar to “my love” or “my friend”

I write about running, music and spirituality.
View all posts by Bruce Pegg →
This entry was posted in Aya Gooin' Down De Mont?, Thoughts from the Guv'nor and tagged De Montfort Hall, Leicester, Oral history, Rock music in the 1970s. Bookmark the permalink.