I’ve referred to guest blogger Glenn Williams many times in the Aya Gooin’ Down De Mont? blogs. Now it’s time to meet him in person. One of my oldest and dearest friends, Glenn grew up in Evington just a few streets away from me. We both went to the City of Leicester (then) Boys’ school before parting ways–me to Loughborough University before heading to the US, and he for a short time working for Marconi Radar in Leicester before moving to London, then Melbourne, Australia and finally Tokyo, where he has lived and worked for the last fifteen years. But our friendship has transcended geography and endured for more than forty years.

There is no question that Glenn’s experiences watching shows at the De Montfort Hall shaped his later life. In London, he worked for numerous bands, including Girlschool, Asia and Rock Goddess; in Melbourne, he spent a decade working for a music supply company, importing and distributing musical instruments throughout the country. And in Tokyo, he continues to work with bands on their Japanese tours, either as a tour manager, a promoter, a record company head or, most recently, a journalist.

This is Glenn’s story of the February 24, 1980 Peter Gabriel show. What I love about it is how it perfectly describes the magic of gig day, from the impatience of having to endure the daily routine through to the ritual pre-gig pint and the building anticipation and, finally, that amazing moment when one of your heroes steps into the spotlight for the first time. I also love how Glenn captures the way shows at the De Mont took us out of our humdrum existence at school, or in this case, work, and transported us to another world.

I should note, in the interest of accuracy, that the Gabriel show took place on a Sunday evening. But that doesn’t change the spirit of the piece, or the memories of the actual show itself.

4:10 PM. Why does the last twenty minutes of the day always take so f!#king long? It’s been another average Tuesday spent with the Marconi veterans cracking the same piss-poor jokes they’ve been cracking since I started here two years ago. I tolerate these poor sods because I have too, but basically they are mundane blokes with mundane lives, pretending to be an important part of a company that couldn’t give a flying f!#k about them. They are nameless employees in a massive company, government contracted and government funded. Occasionally one of them comments that they used to have hair as long as mine and that one day I’ll have it cut. Another will notice the graffiti on my jeans and mention he saw Deep Purple three times: I ignore the former and pump the latter for more information but he’s not interested in reminiscing.

4:20 PM and the day is all but done. Nobody here works for the last ten minutes except the guy on the horizontal lathe, hunched over his machine, cutting Sheffield’s finest to 1/128th inch. You’ve got to admire the man. Started here as an apprentice–as am I–and has worked his way up to … well, Leicester’s best horizontal lathe cutter. I watch this man shuffle away every day, out of the factory gates to some council house in Eyres Monsell where he’ll no doubt have his lamb chops and mash and put his feet up to watch Porridge. The thing is, the hunch he has while operating the great machine never goes away. It’s there as he shuts down the monster cutting tool and prepares to clock out. He never notices me but I notice him and make a mental note to myself, every day, never to end up like that.

4:28 PM: HOOOOOOOOOOOOOOOOOONNNK! That’s the “Wash Up” siren and the factory’s high productive engineering whine descends to a silence like an old 78 running out of spring power. I don’t bother with the mad dash to the washroom as I’ve been assigned to work in the “Inspection Department,” which basically means you never get your hands dirty. Instead I head straight to the clocking out machine, racing for pole position with the other apprentices, some of whom are just eager to get out of Colditz; others, who, like me, have plans for the night .…

5: 55 PM: Mum’s dinner has been scoffed and I get up to leave the table. Dad asks where I’m going tonight. “De Mont” I reply not even looking at him. “Who’s on?” he asks trying to make conversation. “Peter Gabriel,” I reply. Feigning interest and recognition in a desperate effort to converse with his son he replies, “Oh,” but the conversation is over. Five minutes later, wearing the same jeans I wore at work but a different T-shirt, I throw on my denim coat–the one I bought off the little old lady on the market–and shout “I’m off” as I head out the door.

It’s cold and the February chill bites into my bones a bit, but rounding the corner from Kilverstone Ave, I see sanctuary in the warmth of the upper deck of the 67 bus, sitting patiently, waiting for me. As if it’s seen me, the rear lights come on, the engine kicks into life and I charge down the hill full pelt because I don’t want to miss it, even though I know I have plenty of time to catch it. Fare paid, upstairs, back seat, Rothmans lit, I drag deep and exhale slow as if I owned the upper deck which for a moment I do as I’m the only one on it.

Towards the top of Evington Road, I walk up the bus swinging between the stanchions as I go, bound down the stairs as it turns into London Road and alight through the center doors going straight into the Marquis Wellington. The barman asks me if I’m eighteen and then serves me anyway without asking for proof. I drink two pints of best bitter whilst sitting on my own, listening to the jukebox which doesn’t seem to have a record changed since Ned Miller was in the charts with “From A Jack To A King.”

7:10 PM: Time to go. The short walk to the De Mont is alive with fellow gig-goers although, unusually, I don’t recognize anyone. Not that it matters as I know someone will be inside I do know. Rather unusually, I even have a ticket for this one having seen Gabriel the last time on his first solo tour and not wanting to miss him this time around. Up to the doors, ticket torn in half, bear right into the hall and as I descend the little slope under the balcony, I spy Bruce on his tod in his usual place by the mixing desk; we had bought the tickets together. There’s a bit of chit-chat and he shows me the program. Neither of us know Random Hold, who are the support band, but one of the band member’s name had a familiar ring. Bruce questions whether he was in Capability Brown [Bruce: I was getting my Fergusons mixed up. David Ferguson was in Random Hold; Tony Ferguson was in Capability Brown]. I can’t remember, but we decide to give ’em a chance when the lights dim at 7:30pm. A few songs in and we head to the bar. It’s not that they’re bad, it’s just that the bar seems favorable.

8:30 PM and the roadies are milling around the stage, occasionally saying “Two, two, one two … chi-yeck!” into the mics as the audience anticipation swells. The last time Gabriel was here, he was excellent, and word of mouth has obviously spread because it looks like he’s sold the place out. At the usual time of 8:45 PM, the lights go down, the intro music starts, the cheer goes up and we face the stage waiting for him to appear … except he doesn’t. We stand there wondering what is happening, when someone next to me shines a bright torch in Bruce’s face. Before my eyes can focus, the torch has whirled around into my eyes, blinding me for a few seconds. Then it vanishes and I focus. I looked at Bruce who is looking at me. Simultaneously we look towards the source of the light and stare in disbelief at the man himself walking through the audience from the back of the hall, tapping people on the shoulder, edging his way towards the stage, his band mates doing likewise, spread out across the auditorium. Those at the front have no idea of the theatrics going on behind them: we are in awe. 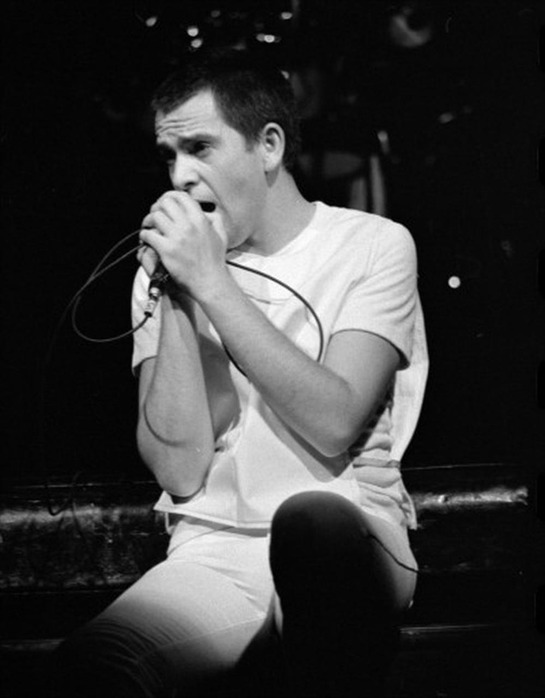 9:50 PM: Peter has delivered a good show. One more, he says, to close it. Another from the new album, he says, which will be out in May. Damn. We want a Genesis number. Odd to finish on a song that hasn’t been released yet .… The stage lights fade, there’s a low bass note from the keyboards accompanied by a simple percussion rhythm and a droning guitar. A spotlight hits Gabriel full in the face and he launches into a short monologue about Steve Biko. I know nothing of the man, but Bruce’s ears perk up in recognition. Gabriel’s face portrays pity, anger, sympathy, sincerity and heartbreak as he sings a new anthem. He and band stand motionless for the duration of the song. There are no lighting changes other than a gradual fade of white over the stage.

9:57 PM: Bruce, myself and over two thousand other fans are left dumbstruck by the sheer power of it. We applaud almost in disbelief. There is an encore, but it seems pointless. We turn to leave as the lights go up. We’re towards the back, so we’re one of the first out. The cold night seems to have warmed. Dad has come to give us a ride home; we pile in the car and he asks how it was. “Fantastic!” I said using my limited vocabulary. “We just witnessed something different and very special,” said Bruce, enunciating better. “Oh,” says Dad. “That’s nice. When’s the next one?” With rabbit in headlight eyes, we drive home speechless.

Want to add your memories of concerts at the De Mont? Fill out the form below!

I write about running, music and spirituality.
View all posts by Bruce Pegg →
This entry was posted in Aya Gooin' Down De Mont?, Thoughts from the Guv'nor and tagged De Montfort Hall, Leicester, Oral history, Peter Gabriel, Rock music in the 1970s. Bookmark the permalink.