Life Gets in the Way (Part Two): The 2017 Flower City Half Marathon 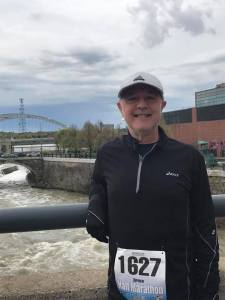 Within minutes of crossing the starting mat, I knew something was wrong. At the turn off Broad and onto Main, I began to feel like someone had stuffed a five pound brick into my stomach, patted me on the head, and and said, “Spring marathon? Who you kidding, son?”

I knew enough to know that it wasn’t gastric distress. Been there. Done that. No, this was different. This was a feeling I have never experienced before. It wasn’t a cramp or a stomachache in any conventional sense. It was more like a tightness that was so uncomfortable it left me feeling sluggish and short of breath.

In my heart, I knew the decision not to run a spring marathon had already been made. It was a tough pill to swallow. I hadn’t even made it to mile four, and I was already into survival mode. But I was going to finish, no matter what.

Just after we made the turn onto Park Avenue, I started running alongside another runner. We were running at a similar pace, and we started chatting as you do. Her name was Andrea, and we ran together down Park Avenue talking about the weather, races we had done, the local running community — the kind of idle chitchat that runners typically engage in midrace. I told her a little about the way my life had been going recently and the problems with my stomach and, as we made the sharp left turn onto Goodman, she turned to me and simply said

Within a nanosecond, I knew she was right. Of course she was. Everything I had experienced in the last few weeks had finally caught up with me. The crazy emotions, the rollercoaster ride I had just been through, had all exacted its toll on my body. I had trained enough to run this race — I knew I was up for the challenge — but I had reached the point where my whole being was saying “enough.”

I ran with Andrea a little further down Goodman before parting ways at the aid station at mile six. Hoping that the brief stop would help ease my stomach pain, I took advantage of the portapotty, then hydrated and began the climb up the hill into Highland Park.

I had lost valuable time, but the gamble paid off. I felt strong on the elevations as the course wound it way through Mt. Hope cemetery. Around mile eight, at the same spot she met me two years earlier, Tessa met me for a hug and a kiss that lifted my spirits even more, and shortly after I caught up with Andrea and ran with her briefly past the tombs and headstones. But I was getting stronger now, and she was starting to fade, so we parted ways for the last time and I set out for the river trail and the last three miles.

There was just one more unexpected obstacle to overcome. A little history was about to repeat itself and add some extra difficulty to the race’s end.

Around mile eleven, the heavens opened, just as they had done two years ago, soaking us all in a freezing rain that started to bring our core temperatures down rapidly. As if that wasn’t reason enough to pick up the pace, a couple of thunderclaps increased my sense of urgency, and I finished the race with a strong 8:44 last mile. 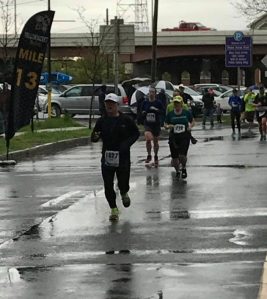 There would be no spring marathon this year.

My head knew it was the right thing to do, and my heart reluctantly agreed. I had put my body through enough for now.

But New York lies ahead. If I run no more races this year — heck, in this lifetime — that will be more than enough compensation. 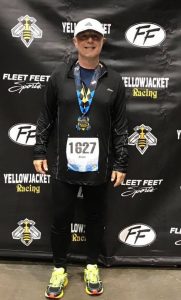 I write about running, music and spirituality.
View all posts by Bruce Pegg →
This entry was posted in The Flat-Footed Fox and tagged fitness, Flower City Half Marathon (Rochester), long-distance running, stress, TCS New York City Marathon. Bookmark the permalink.

4 Responses to Life Gets in the Way (Part Two): The 2017 Flower City Half Marathon