Review and Response: Harvey Cox — How to Read the Bible

I decided to be proactive about getting out of my spiritual funk. In the only way that has ever worked for me in every avenue I have ever explored in my life, I decided I need to educate myself. That means research, and it means study.

The first place I have been led to is Professor Harvey Cox‘s How to Read the Bible.

It was not the book I was looking for — after several weeks of searching, I’m pretty sure that book has yet to be written. But if you try sometimes, as the song goes, you just might find you get what you need.

Cox’s premise — one that was familiar to this old English major before I even opened the first chapter — is both easy to grasp and deeply profound. It rests on one of the basic tenets of literary analysis: why were the books of the Bible written, and who were they written for?

Each one of those questions could be a separate book in and of itself. But Cox’s purpose is to give a brief overview of each analytical approach and apply them to different sections of the Old and New Testament.

So, he looks at Genesis through the lens of “‘source analysis,’ the attempt to identify the written and oral traditions that were patched together to compile the book” (page 14); at Exodus through the lens of archeology and historical research; Job through literary theory; the Gospels through textual analysis; the Pauline letters through “empire studies,” a different historical approach that focuses on life under a colonizing power; and Revelation by looking at its canonization — the controversial and political process by which books made the cut into the Bible we now think we know. (Spoiler alert: Revelation went in and out of the Bible for hundreds of years, and its inclusion was, and still is, the subject of much debate).

That’s an important point, which I’ll come back to in a minute. But it raises another point that needs to be refuted right off the bat. Cox’s aim in this book is not to trash the Bible as a sacred text, nor is it to bash Christianity. Instead, his aim is to deepen our understanding of probably the most pivotal text in Western civilization. It’s not an easy task — it requires work on the reader’s part — but the rewards are significant and well worth the effort.

The process by which Cox proposes we do this, however, will doubtless raise the hackles of ardent fundamentalists.

Because he advocates reading beyond the surface-level interpretations of the literalists,  (what he calls the “narrative stage”), calling such a reading “innocent,” “unsophisticated,” and “superficial.”

Importantly, however, he does not dismiss this way of reading entirely. Because regardless of whether or not you read them from a religious perspective, Biblical stories provide us with drama that entertains, enlightens, and enriches us. More — like it or not — they form the foundation of Western civilization, so they give us significant insight into the way societies were shaped and psyches formed over millennia.

To understand them is to understand ourselves, with all our imperfections and our contradictory capacities for good and evil, love and hate.

But, Cox argues, that will only get us so far. There are details to be uncovered, but thankfully it is not the Devil that is within them. 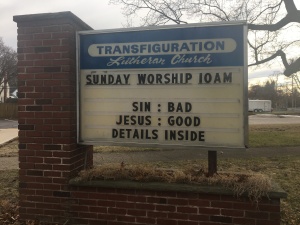 Reading the Bible using the “historical-critical” method of analysis (what Cox calls “the historical stage”) brings out new levels of meaning. To know, for example, that the archeological record does not support the history of the Jews’ flight from Egypt and their 40-year wandering in the wilderness as chronicled in the book of Exodus adds a whole new depth to the text.

It is important, however, to know that this does not mean the text should be dismissed because it is not historically true. Cox sides with the current understanding that Exodus was a patchwork of traditional stories woven together some 600 years after the events it describes supposedly took place. The authors (for they were several, and none of them Moses, traditionally identified as the book’s author) did this not to “fashion a ‘historical’ record of events that had long since faded into dim memories. Rather, it was to craft an inspiring saga that would imbue the Israelites, who often felt threatened and fragmented, with a sense of unity and hope” (page 61).

Seen this way, Exodus become a “story of liberation … to bolster current national and religious purposes” (page 62). Small wonder, then, that the book has comforted and inspired many oppressed people around the world, especially enslaved blacks in nineteenth century America and their descendants, the freedom marchers of the late 1950s and early 1960s.

It may not be historical truth, but read the right way, Exodus can lead us to as deep and as spiritual an understanding as any fundamentalist reading that claims the book is the literal word of God.

And this takes us to the third, “spiritual stage” of our reading, where instead of finding “truth” (whatever that might be) or, worse, imposing our preconceived ideology and our own truth on the text, we (in Cox’s words) “start to engage the text in a no-holds-barred wrestling match.” We should, he goes on, “listen, and be ready to change, but also to argue” (page 16). We should engage the text in dialogue, he concludes, and be full participants in the journey as it unfolds. That way, we can finally determine what it means for us, and not passively accept someone else’s vision of it, no matter how well-intentioned or ill-informed that might be.

Which leads me to the point about the Book of Revelation that I mentioned earlier.

Of all the book of the Bible, few are more dramatic — a Technicolor sci-fi Hollywood blockbuster as Cox would have it. Whether you have read it or not, you are familiar with the book’s locations, imagery, and dramatis personae: the great red dragon,

the four horsemen of the Apocalypse, the battle of Armageddon, the Antichrist, the Number of the Beast have all entered our lexicon and fueled our collective unconscious with nightmares of judgement and the world’s end.

And an entire Christian theology — millennialism — has been built around it.

But, Cox cautions, reading Revelation as a literal depiction of the end times is a dangerous thing. First of all, he points out, it is only through various flukes of history that we are reading this book in the first place.

For almost 700 years, the early church went back and forth about whether to include it in the Bible. Many who argued for its inclusion did so under the mistaken belief that the book’s author, John, was the same John who wrote the fourth Gospel, giving Revelation an authority that it would have otherwise lacked. It was omitted from the Bible by the Council of Laodicea in 363 and reinstated by the Council of Rome in 382. The Synod of Hippo (393) and both Councils of Carthage (397 and 419) said it belonged, but as late as 692, the Eastern Orthodox Council said it did not.

And the struggle over its authenticity continued through to the modern era. Like John Calvin, Martin Luther rejected it at first, though Luther finally did accept it. And still, to this day, Eastern Orthodox Christianity does not incorporate it into its liturgy.

It’s a pretty shaky foundation on which to build an entire doctrine of judgement and retribution, one that enables literalist readers to rationalize hellfire and damnation raining  down on people of different cultures and religions who don’t happen to share their particular beliefs.

Cox, however, believes it does belong, but again with the eminently sensible caveat that we read it correctly. Knowing that the book’s author was a political prisoner, exiled “on the island of Patmos because of the word of God and the testimony of Jesus” (Revelation 1:9) begins to open up the text. So, too, does knowing John’s audience is the seven early churches of Asia that are attempting to spread the Gospel to a world that is, at best, indifferent and, at worst, downright hostile.

John, in Cox’s words, “is angry, indeed furious, incensed at the pride and the cruelty of the Roman Empire. He sheds no tears over its coming disintegration … he finds it just, appropriate, and richly deserved” (pages 191-2). John, Cox goes on, sees “the imminent collapse of Rome within a narrative of world history in which one empire after another — Egypt, Persia, Babylonia — rises and falls” (page 195). Revelation, in this interpretation, is nothing more than an all-too-human wish fulfillment writ large.

But it is a vision John cannot communicate to the Seven Churches in direct language for fear that the Romans will intercept his letter and punish them all even further. So, “as a political prisoner writing for a persecuted minority,” John “cleverly composed the book in an argot that his intended audience, or some of them, would understand, but outsiders would not” (page 196).

John’s argot, his language, is based on symbols. Some, such as the four creatures and the Lion of Judah that appear before God’s throne in Chapters 4 and 5, would have been readily identified by the Churches as the four authors of the Gospels and Christ himself. These meanings still hold true for us today. But the meaning of many of the other symbols has been lost to time, leaving a text that is especially prone to misinterpretation and manipulation.

Still, the essence of the book — its spiritual meaning, if you will — is to give comfort to all oppressed peoples. Like Exodus, Revelation shows us that deliverance is possible, that our suffering will one day be rewarded, that evil will eventually be conquered, that one day “there will be no more death or mourning or crying or pain, for the old order of things has passed away” (Revelation 21:4).

The message may be hopelessly idealistic. But it shows that Revelation does belong in the Bible as a bookend to Genesis, which introduced the notions of sin and suffering and evil and death in the first place. Or, as Cox puts it, “the ‘Amen’ with which it ends is not only a finis for Revelation, but for the whole book” (page 213).

In the end, there will be those who are upset that Cox’s analytical approach is too wide open, that it advocates for too many differing interpretations and never sides with anything definitive.

And they may have a point.

That is not to say that all interpretations will be valid or, worse, that, in William Blake’s words in his Everlasting Gospel, you and I can read, “the Bible both day and night/But thou read’st black where I read white.”

But interpretations that fall within the scope of the Bible’s moral trajectory — interpretations that remind us we are not perfect creatures, that we must be sympathetic to the plight of the downtrodden, that such sympathy is one way to begin eradicating evil from this world, and that our mission, our life’s purpose, is to engage in that struggle — need to be welcomed with arms as outstretched as those of Christ on the cross.

And this is the “why” that should inform any study of the Bible, perhaps even more so than Professor Cox’s “how.”

2 Responses to Review and Response: Harvey Cox — How to Read the Bible