#runstreak Day 147: Bringing it to Burlington

You learn to expect the unexpected in a marathon.

From bonking at mile 18 on your first attempt to searching for a portapotty at mile 25 to avoiding spectators who leap out in front of you without warning, after a while you learn to … ahem … take it all in stride.

Except nothing prepared me for the moment when I crossed the start line in Burlington. After weeks of training and tapering, of doing everything by the book and exactly the same way as ten previous times, my legs felt like concrete. From the second I crossed the timing mat, lifting each foot off the ground required what seemed like a superhuman effort.

Instead of feeling that adrenaline surge and fighting the urge to go off like a sprinter, I felt dead from the hips down. Instead of enjoying those carefree early moments and soaking in the energy of the crowd, I immediately went into the kind of survival mode that I usually reserve for the last ten miles.

That was how my fourth Vermont City marathon began. The little bit of Meb magic that had rubbed off on me at the expo the day before had disappeared without a trace.

Most runners, myself included, feel like this the day after a particularly hard workout. But I’d never experienced anything like it after a leisurely taper week. Heck, we’d even travelled to Burlington a day early, and I’d really taken it easy all day Saturday, just to keep my legs fresh for the main event.

“Well, this is going to be a slog,” I muttered under my breath as we headed for Church Street and downtown Burlington for the first time. I began to wonder how much mental and physical energy this was going to suck up before I even made it up Battery Hill. I even began wondering if I was going to make it to Battery Hill.

About a mile and a half in, I found myself stuck behind the four-hour pace group, who were spread out across the narrow South Willard Street, keeping me from my comfortable pace. Looking back, I should have stayed on their shoulders and slowed down until I felt better. But I was feeling like crap and not really thinking straight, so when the course made a sharp right down the short Beech Street hill, I jumped onto the sidewalk and let the force of gravity power me past them.

Unobstructed, I headed back into town, then onto the Beltline. Thankfully, the early start and overcast skies meant there wasn’t going to be a repeat of the sauna-like conditions we had experienced there two years earlier. Despite the effort, I was hitting a good early pace of around 8:40 min/miles — not fast enough to meet my A goal, an ambitious BQ pace of 8:07, but fast enough to comfortably hit my C goal of a sub-4:00 hour run and within a shoelace of my B goal, a PR of 3:46 or better.

Then, as we ascended the Beltline hill around mile eight, I finally felt my body begin to cooperate. No wonder a race photographer captured me with a smile at that point … 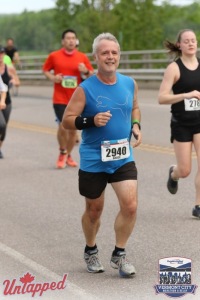 … and Tessa a grin a mile further on. 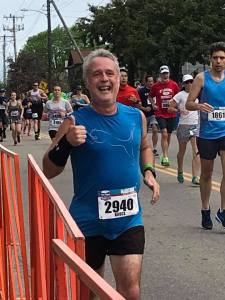 By the time we made it back through town and started the southbound loop to the halfway point, I was finally feeling good. I had settled into a very easy 8:45 min/mile pace — again, plenty fast enough for a sub-four finish, but still just a hair outside PR time. 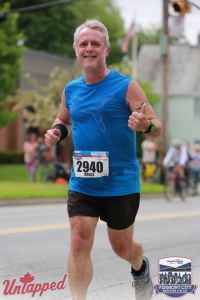 But Burlington being Burlington, I knew that Battery Hill and the heat of North Avenue were ahead to slow me down.

Still, I was strong up the hill, and seeing Tessa again at mile 16, about a third of the way up 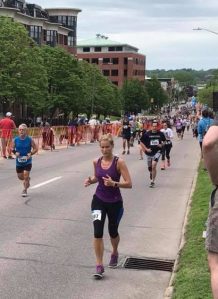 was a welcome site that gave me a solid boost entering into the last ten miles.

Like the Beltline, the long, shadeless stretch of North Avenue was not as brutally hot as it had been two years ago. I continued to feel good even though I felt my pace beginning to slow. By the time I got to the bike path, I was around 3:20 and I knew I wasn’t going to beat my PR time.

Even so, I was determined to finish strong.

The funny thing about Burlington is that the easiest miles of the course — the flattest, shadiest, breeziest miles — come at the hardest moment, and I had walked or struggled on the path on my previous three Burlington runs, even my 2015 run.

It was time to pull out every trick in the book to keep myself running.

I varied my pace, as Jonathan Griffiths of Rochester Running Company had suggested before I ran New York last year. I disappeared into Zen-like mental states for what seemed like hours but were, in reality, seconds. I sang fragments of songs to myself. I dreamed of burgers and beers.

Around a half mile out, the path takes a gentle, downhill, right-hand turn before opening up from its pleasant, narrow, tree-lined confines. That was the moment I heard cheers from the finish-line crowd — the best sound any runner can ever wish to hear.

I allowed myself a brief self-congratulatory moment. I had run a good technical race, overcoming the unanticipated early problems, and I had pushed through mentally to overcome the inevitable late fatigue.

Then it was time for the last push to to the finish line with a sub-four finish in the bag. And I will take that any time over a PR or a BQ  … 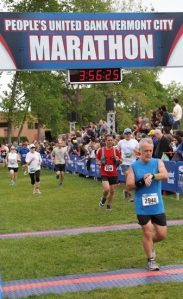 Reunited with Tessa at the waterfront, I finally let myself float in a lake (Champlain) of emotion. Together, we celebrated my fourth fastest marathon ever, my first sub-four in over two-and-a-half years, and the second consecutive marathon where I had executed my game plan (lead legs notwithstanding) to my own satisfaction.

On this day, at least, the momentum of 2018 and the #runstreak was still flowing forward.