Out with the Old, In with the New

New Year’s Day. It’s a time for reflecting on the past and making plans for the future. For me, it marks the end of a running year that saw me complete my first ever marathon and, after a quick 5K through the slushy streets of Canastota two days ago, 1,000 miles for the calendar year 2012. Not a bad way to end to my third full year of running. 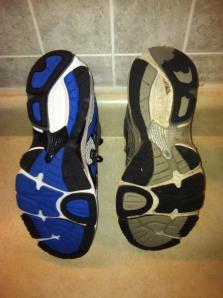 It all seems so easy right now, sitting on my couch with a cup of coffee in front of me. But last year’s experience has taught me that this is going to be extremely hard work–a grueling 9 months that will start in cold and snow and continue through brutal heat and every weather condition in between.

But I also know I am heading into this year a lot smarter. For one thing, I will be following the Hanson’s Marathon Method, a more scientific running program than the traditional one I followed last year for Toronto. As this year develops, I’ll be writing about its effectiveness for me.

For now, though, I want to reminisce about 2010, the year it all began, and my first ever run in the Utica Boilermaker, where the program was simply to survive.

A 28:57 5K in April and a 10K in May that took 1:04:36 to complete were the extent of my formal race preparations for the 15K in July. The 10K was of particular note, as it was the first time the notion of race strategy had presented itself to me. The race, at Beaver Lake Nature Center in Baldwinsville, NY, was a trail run that started in the Center’s parking lot before the course funneled runners down a narrow, muddy trail which then turned into a slippery boardwalk. I came ill-equipped with regular road shoes; worse, I was immediately taken out of my rhythm as runners jockeyed into position or slipped over around me. Finally, the congested pack began to thin out, but it took the best part of the first couple of miles before I found some breathing room and a comfortable pace. Despite the rocky start, I finished with a respectable time and a whole new understanding of competitive racing.

Through the rest of May and into the heat of June, I clumsily prepared for the Boilermaker. No one told me about bringing along water on my training runs, and I had yet to be introduced to energy gels. Consequently, 2 runs were broken off when my blood sugar levels dropped precipitously low. But I persevered, and conversations with running friends clued me in to the mysteries of proper nutrition and hydration.

Even so, as race day dawned I was very apprehensive. I approached the race with a great deal of caution and ran a slow and deliberate 1:46:35. But what a thrill to go over the brow of the first incline after the start and see the huge crowd of runners snaking along the Parkway as far as the eye could see; to make it half way up the golf course hill and look back at those still behind me; to hear the crowds cheering and read the funny signs (“Only 9 miles to free beer!”); to run down the Champlin Avenue hill and hear my DJ friend Kenny Morrison call out my name for all to hear over his PA system; to round the corner onto Whitesboro Street and briefly dance the Chicken Dance with an unknown woman; then finally to cross the finish line and join the enormous party in the Saranac Brewery courtyard and sip my first cold beer, a fitting way to end the morning’s exertions.

When I reunited with my son, who had thrown down this particular gauntlet to begin with, I made the decision that I would run the Boilermaker again in 2011. But thoughts of doing anything more than that never entered my mind. I was not yet ready to call myself a runner.

I write about running, music and spirituality.
View all posts by Bruce Pegg →
This entry was posted in The Flat-Footed Fox and tagged marathon training, running, Utica Boilermaker. Bookmark the permalink.

2 Responses to Out with the Old, In with the New