A Cruel Race for April Fools: The 2016 Syracuse Half Marathon

Remember when your parents gave you that speech about how hard they had it as kids? How they had to walk five miles to school and back every day. In a blinding snowstorm with snow drifts up to their eyeballs. Up hill. Both ways.

Those of us who ran the 2016 Syracuse Half Marathon will tell a similar story about this race in years to come to newbies, runners from warmer climates and just about anyone else who will listen.

Except what we say won’t be an exaggeration. It won’t have to be.

It was a race run in conditions so bad that it was worthy of a write-up in Runner’s World. In the piece, Meghan Kita, the author of the article, describes the weather as “gnarly.” It’s an adjective that pales in comparison to the expletives I and other runners on the course used at the time.

We can’t say we weren’t warned. Syracuse.com’s forecast on the Friday before the race, though it underestimated the snow, got the temperatures and the wind chills about right.

But many of us persisted in our madness, refusing to bail on the morning of the race even after (in my case) watching cars spin off the road and being pulled out of ditches by AAA tow trucks. Our insanity received a momentary justification when, at the start line just before gun time, the snow subsided. I and several thousand of my closest lunatic friends experienced a temporary lapse of judgement and took that as a sign that the weather was going to improve.

We couldn’t have been more wrong.

For the first two miles, as we ran up the bare James Street hill into Eastwood, there were just a few friendly snowflakes in the air, and optimism was high that maybe the worst had indeed past. But as we crossed James Street, the snow began falling again.

At mile five, we began the trek along Grant Boulevard, where we were greeted with pea-sized hail and 25 mph headwinds that lasted for a good ten minutes. Worse, the road surfaces were beginning to really crap out. Snow gave way to slush, slush to compacted snow, compacted snow to ice and back again to snow, sometimes in a matter of a few strides. Traction kept getting harder and harder. Each footfall was greeted with a slight slide that placed extra strain on our leg muscles and forced us to increase our normal effort.

The anticipated boost from running down the Danforth Street hill and into the Inner Harbor area never materialized. At the bottom of the hill, the wind became a cross wind, so stiff you actually had to lean into it to keep an even keel. Visibility went down to less than a hundred yards, and we passed the largest mall in New York State and a very big lake without even seeing them. We were now in a full-blown lake-effect snow squall.

At mile ten, I decided my body had taken enough of a beating for one day. The cumulative effect of eight miles of slipping and sliding was taking its toll on my legs, and with all hope of a PR blown away on the snow-filled wind, I figured the best thing to do was to run the last 5K steadily but conservatively. Franklin Square, The Armory, Salina Street all came and went as the sun finally struggled to come out, and I crossed the finish line at 1:56–ten minutes slower than last spring’s PR over the distance, but ten minutes faster than the first time I ran the course three years earlier.

At the post-race party in the Oncenter, with the sun now streaming down, runners were definitely of two opinions: the race was either an amazing experience or it sucked. But I left feeling that such simple sentiments, like the binary of success and failure, don’t do justice to a race like this. All races produce many deep, complex and often contradictory emotional responses: we relish the challenge of achieving our goals; we feel optimism at the start line; we laugh at the absurdity of running, especially when the odds, whether they be personal or circumstantial, are stacked against us; we experience joy in the sensations of speed, of air being sucked into our lungs, of our legs pumping in rhythm; we cry with the pain of the effort; we grit our teeth and suck it up; we wrestle with the idea of quitting; we enjoy a quick chuckle at a silly sign or a comment from a fellow sufferer; we express gratitude for the volunteers and law enforcement personnel who are giving up their Sunday morning for our enjoyment; we feel relief at seeing the finish line; we revel in knowing that temporary badass status will be conferred upon us among family, friends and colleagues for the next few days. 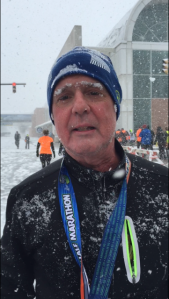 POSTSCRIPT: In addition to the Runner’s World piece, Syracuse.com and fellow runner Scott Dawson both have their own take on the day.

And a special thanks to all the spectators and supporters who also had to brave the weather, especially the incredible Tessa,

whose undying devotion to Team Love Nugget at the start and finish line was eclipsed by her far more sensible decision to steadfastly remain in the relative warmth of the nearest Wegmans during the race, proving once and for all the truth of the old adage, “when the going gets tough, the tough go shopping.”

I write about running, music and spirituality.
View all posts by Bruce Pegg →
This entry was posted in The Flat-Footed Fox and tagged 2016 Syracuse Half Marathon, Lake-effect snow, Runner's World. Bookmark the permalink.

2 Responses to A Cruel Race for April Fools: The 2016 Syracuse Half Marathon