No Easy Miles: The 2015 Flower City Half Marathon

If Montgomery Burns designed a half marathon course, I imagine it would look a little like the Flower City Half Marathon: two nasty hills a little past the halfway point with a short section of cobblestones on the second to mess with runners’ footfalls, all ironically set against the backdrop of a cemetery with a hospital just outside the graveyard exit to rub it in. 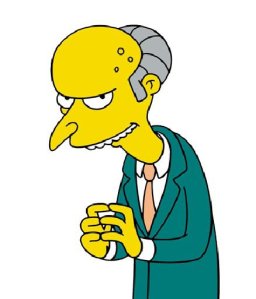 In the end, though, it wasn’t Mr. Burns’ devious plans that almost got me. It was my own body and brain that tried conspiring together in an attempt to get my 2015 running season off to a disastrous start. A nasty bout of diarrhea fifteen minutes before gun time, brought on by the remnants of a mild stomach bug I had been fighting all week, left me wondering if my worst fears of pooping myself in public were about to come true. (And, yes, my nonrunning friends, pooping while running is a thing, and it plagues runners at all levels of the sport).

With my mind … dare I say it? … down the toilet, I barely noticed how congested the start corral had become, and my brain forgot all the tactics and tricks I had learned from Boilermaker starts. As the gun went off, I was boxed in, jostled and taken right out of my starting pace. All the while, I was stupidly trying to fiddle with the zipper on my fanny pack to make sure that my phone and energy gels would be secure.

All this resulted in my immediately losing touch with the 1:50 pace group with whom I had planned to run to keep me at a 8:23 min/mile pace–the pace I planned to run for a 3:40 finish in Burlington, which was now just a month away.

After a first mile that seemed to go on forever, I steadied the ship and began to focus on the job at hand. The revised game plan at that point was simple: to re-establish contact with the pace group, even if it took me the whole race to do it. Not all at once, of course. No, I had to be disciplined and reel them in one mile at a time.

The lesson of Niagara Falls had not been lost.

After another mile, I finally spied the pace leader’s sign bobbing over runners’ heads a few hundred yards in the distance, and for the next four miles, I never let it out of my sight. Slowly increasing my pace and running the road angles brought it nearer in frustratingly tiny increments. But I was gaining, however slowly, and I was not losing touch.

Just before the first hill, my stomach began to cramp (right after I had passed a couple of portapotties, of course), and I began scanning my surroundings for bushes and, God forbid, gravestones should my worst fears come true. I pressed on regardless, taking on the first hill up and into Mount Hope Cemetery and opening up my stride on the corresponding downhill to speed up and get within sprinting distance of the 1:50 group.

Part way up the second hill, a section of old cobblestones took everyone out of their stride, the uneven surface feeling like hot knives on the bottoms of our shoes and forcing us to tread cautiously for fear of tripping and injuring ourselves. Mercifully, this section of the course was brief, and I continued on at pace to get a hug and a good-luck kiss from Tessa further up the hill before finally catching the group at the brow.

I ran with them shoulder-to-shoulder very briefly. But with just a third of the race to go, and no sign of the stomach cramps reappearing, I decided this was the moment to strike. I upped my pace once more and began to pick off runners one by one as the course continued to meander around the cemetery before finally heading up the Genesee River. I was on familiar territory now–this was the trail where I first broke four hours for a full marathon and where I had come within seconds of my PR for my last half marathon seven months earlier.

And that’s what I did, only to finish in complete confusion. As I was heading down the finish chute, I glimpsed what I thought was the timing clock for the half marathon. It said 1:33, but I knew perfectly well I hadn’t been THAT fast. (I later realized it was the clock for the 5K, which had started 15 minutes after our race).

Then I got a text from the race timers saying that I had finished in 1:53. At first, I thought it might be my gun time before I realized I couldn’t have been three minutes back from the start line when the race got underway. The time also had to be impossible, as I never saw the 1:50 group pass me after I passed them.

It was only when we went back into the Blue Cross Arena to check the official results that I got official confirmation for what I had just done. I had finished the race in 1:48:30, five minutes faster than my previous best over the distance.

The result sets up some intriguing scenarios regarding how I should run Burlington. My pace for the Flower City Half was right around 8:17 min/mile, a pace that would put me in line for a 3:37 finish if I could sustain it over 26.2, which would put me right in the frame to qualify for Boston. However, pace groups at Burlington are being only being offered for 3:45 (8:35 min/mile pace) and 3:30 (8:00 min/mile pace).

So should I run with the slower 3:45 group and try to break away at some point after half way to try for a more ambitious time as I did at Flower City? Or should I adopt my Niagara strategy and hang with the much faster 3:30 group for as long as my body lets me, hoping they suck me into a fast time?

Any runner will tell you that right after a race is not the right time to answer such questions.

Especially when another trip back to the men’s room is required.

1 Response to No Easy Miles: The 2015 Flower City Half Marathon