In the weeks leading up to the Marine Corps Marathon, when someone asked me what the hardest part of running the marathon was going to be, I jokingly answered, “Getting to the start line.”

As it turned out, my glib answer was pretty accurate.

As taper week wore on, it became more and more obvious that Tessa wasn’t going to make it. On Tuesday, she came down with a virulent strain of flu, which her recent surgeries left her powerless to fight. On Friday, she made the decision that she wasn’t going to be able to come to DC with me, and when a couple of last-minute phone calls to various members of Team Love Nugget came to nothing, the realization set in that I was going to have to do this all by myself.

So, it was up at five AM on Saturday and, after a brief stop for gas in Syracuse, it was onto Route 81 for the four-hundred-mile ride. But what should have taken a little over six hours ended up taking eight when traffic south of Harrisburg PA slowed to a crawl and, eventually, to a grinding halt when an accident just north of Gettysburg shut down all four lanes of Route 15.

As luck would have it, I quickly found a detour around the accident, but now I was running behind. There would be no scheduled nap at the hotel if I was going to get my bib and make the Team Fox pasta dinner on time.

By two PM, I was in my hotel room in McLean, and after quickly ditching my gear, I set out to find the Metro station. That, in itself, wasn’t a problem, but once I got on the Silver Line train downtown, it dawned on me that the hotel was a lot further out than it looked on the map. Getting to the Expo to pick up my race packet took over an hour, and I realized that I was going to have to get up very early the following day to get to the start line.

Fortunately, packet pickup was a breeze,

and the Team Fox dinner was just a few blocks from the convention center. Sitting down to break bread and slurp pasta with the illustrious Mr. Wheatcroft and the other fundraisers 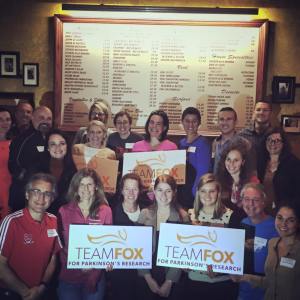 was a delight, and the news that the team had surpassed $76,000 in donations made the whole evening, indeed the whole weekend, very sweet.

Midway through the dinner, however, a huge wave of tiredness swept over me. I had been on the move for over twelve hours, and I still had an hour’s train ride to get back to the hotel, where I still had to ready my gear for the following day. As soon as it was feasible, I said my goodbyes and started the trek back to McLean.

It was past ten before I turned in.

Around the tables, the talk had been about getting to the start line early to allow plenty of time to get through the crowds on the Metro and the security checkpoints. On the train back to the hotel, I made the decision that I would get to the Pentagon on the first train leaving Tyson’s Corner.

That meant a four AM alarm and a very short night.

We made it! When I got back to the hotel after the race, I found that we had passed the finish line and finished with the highest dollar total of any of the four Team Fox fundraisers I have been a part of. Way to go, friends, family and colleagues–Team Love Nugget salutes you all!

If you want to keep the momentum going, though, you can still make donations up to the end of the year. Just go to my fundraising page and make your contribution to help eliminate Parkinson’s!

How do you spend the day before a big race? What rituals or preparations do you go through? Send me your thoughts and I’ll feature them in the next Semper Currens.