My second race of the year. Unbelievably, like the first, it was featured in Runner’s World for its extreme conditions. The craziness of my 2016 running season continued unabated in the sweltering heat of my third Vermont City Marathon.

I suppose I should be happy just to have survived the day, let alone cross the finish line. But me being me, I now have to try and deal with the fact that I ended up registering my worst ever marathon time (an unofficial 4:55) on a course where, exactly a year earlier, I had set a 3:46 PR.

As I’ve been saying, it’s been that kind of year.

The race began badly and went downhill from there. Barely seconds in, my phone fell out of my pack, and I became “that guy,” stopping and moving upstream against the press of 3,000 runners to retrieve it. All I can say to everyone who bumped into me and swore is, “I get it, I deserved it and I would’ve done exactly the same in your situation.”

With my pride barely intact, I ran four conservative 9:15 min/miles, deliberately slow and comfortable, then followed the pack out to the sauna that was the Beltline. Even at 8:30 AM, this five-mile stretch of shadeless concrete was generating heat relentlessly, and by mile seven, despite Tessa shouting encouragement from a pedestrian bridge overhead, I knew this was going to be a struggle like nothing else I had ever encountered since I began running five years ago.

To add insult, there was also injury–well, my first nipple bleed in a competitive race for four years anyway–brought on by vast amounts of sweat rendering the sticky backing of my normally dependable fabric Band-Aids useless.

With blood trickling down my shirt and every shred of dignity I possessed now gone, I commenced my first walk. All thoughts of goals and times were now out of the window. This was about finishing, pure and simple.

The next ten miles or so passed in a blur. I had a couple of good running spurts that saw me past the halfway point, and a strong ascent up the Battery Hill boosted my spirits. But North Avenue and the winding route through the adjacent suburban neighborhoods claimed my body as they had done two years earlier. Thank God that so many residents of the area had heeded the race director’s call to turn on their garden hoses and lawn sprinklers for the runners to run through. I was to pay the price for the puddles later in blisters, but at the time, the relief was immense.

At mile twenty-one, about four hours into my race, I was taking water at an aid station when a volunteer announced that conditions had moved into the extreme range and the race had been cancelled. But no one around me, myself included, took his advice to head back to a relay staging area a mile behind us and catch a bus back to the finish line. At this stage in the game, a walk down the Bike Path would get us to where we wanted to be almost as fast. Besides, during training all of us had programmed ourselves to finish. Cancellation or no cancellation, we were going to make it to the finish line.

Which is what we did, passing volunteers, EMTs and even cops, some telling us that the course was closed and the race timing system and finish line had been shut down, and others encouraging us on but urging us to exercise caution. 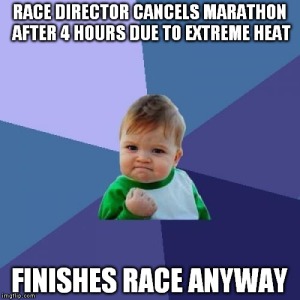 Obeying the instructions of the volunteers telling us to take it easy and walk while ignoring those who continued telling us to exit the course, I took my own sweet time on the Bike Path, enjoying the views across Lake Champlain toward the Adirondack Mountains for what seemed like the first time.

By mile twenty-four or so, I had recovered enough to run the last part of the course and cross the finish line, where an emotional Tessa greeted me. In tears, she told me that she had stopped being able to track my progress on the RaceJoy app and, in the general confusion surrounding the end of the race, she had become worried that I had succumbed to the heat.

I explained to her that my phone battery had died on the course, turning off GPS tracking in the process. Even inanimate objects, it seemed, were having trouble operating in such extreme temperatures.

Over the post-race burger and beer at the Vermont Pub & Brewery, I reflected with her about the insanity of the day. So much had gone wrong in addition to the heat: my training had been erratic and had peeked too early, five pounds of belly fat had stubbornly clung to my waist since Christmas and my race-day preparation had been flawed (leading to the nipple bleed, four possible lost toenails and a huge blister on my left foot). A slight hamstring pull on my left side that I had been nursing for a couple of weeks didn’t help, either.

Could I have done better? Possibly. Did I have time to properly prepare for the extreme conditions? Nope. No one did. Was I going to beat myself up over it? Not at all.

It was time to move on to the next challenge, The Boilermaker, wiser and more determined than ever to get out of this funk.

POST SCRIPT: Just after I finished writing this, Peter Delaney, the race director for the event, posted this letter to the Vermont City Marathon website to explain the events of the morning from his perspective. Later, he elaborated on his decisions in a Q & A with Runner’s World. After reading them, I gained a greater respect for him and race directors in general–they have the safety and well-being of thousands of participants, workers and spectators in their hands, and that cannot be an easy thing. To him, and to the volunteers, first responders and the citizens of Burlington, I say thank you for a job well done under very difficult circumstances.

I am sure our paths will cross again.

I write about running, music and spirituality.
View all posts by Bruce Pegg →
This entry was posted in The Flat-Footed Fox and tagged long-distance running, Vermont City Marathon (Burlington). Bookmark the permalink.