C’mon. You know the words. Sing along with me. Betcha end up sounding like Ol’ Blue Eyes by the end …

I wanna wake up, in a city that doesn’t sleep.
And find I’m king of the hill, top of the heap.

These little town blues, are melting away.
I’ll make a brand new start of it, in old New York.
If I can make it there,
I’ll make it anywhere.
It’s up to you, New York, New York.

These little town blues, are melting away.
I’m gonna make a brand new start of it,
In old New York

If I can make it there, I’m gone make it anywhere.
It’s up to you, New York, New York!

So, now that we’ve sung our theme song, it’s time to get down to business. As I’ve mentioned elsewhere in these blogs, on November 5, 2017, I am going to run the 2017 New York City Marathon.

Words cannot express what it means to me to run what I believe will be the race of a lifetime.

But let me try.

In 2009, I watched a friend of mine run New York, and I was amazed by it all — the sheer scale of it; the amazing competitors of all shapes, abilities, and nationalities; the way the city opens its arms to cheer on the runners and congratulate the finishers.

The experience stirred something in me, motivating me to start running myself the following year to help put my type 2 diabetes in remission and keep myself kicking around this planet for a few more years. 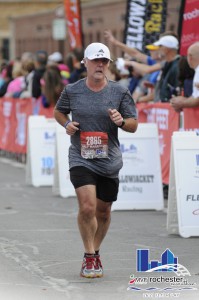 Seven years on, nine full marathons later, and after four attempts to get into the race through the lottery (I’m simply not fast enough to qualify), I am ready to toe the Staten Island starting line and run 26.2 miles through the five boroughs to the finish line in Central Park.

It’s going to be an epic journey that, as with all my previous marathons, will require me to log over 800 miles of running in 16 weeks of training. And, as I have done in my previous marathons, I want to share this journey with my family, my colleagues and my friends who have become known collectively — for reasons lost in the mists of time — as Team Love Nugget.

There are many ways we can experience this together — I’ve outlined some of them below — but the single most important way we can do this is by using this run to make a difference. Since 2012, and my first marathon in Toronto, Team Love Nugget and I have raised over $5,000 for charity. 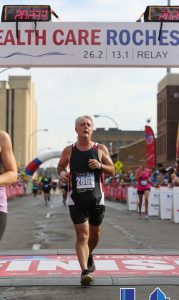 Finishing the Rochester Half Marathon, September 18, 2016

But this year, to celebrate this great occasion, I want Team Love Nugget to raise the bar. That’s why, after much thought, research, and prayer, I have decided to run for Episcopal Relief & Development.

So, I am asking you to join Team Love Nugget, contribute whatever you can, and become a part of this incredible adventure with me. Let us cross the finish line of the New York City Marathon together

while getting closer to the finish line of world hunger and poverty.

Want to join Team Love Nugget and be a part of this momentous event? Here are three easy things you can do:

The adventure starts here! Send me your thoughts and I’ll feature them in the next Vagabond Shoes.