In the end, it was everything I had hoped it would be. It was one of those days when it all went right — one of those days that will stay with me for the rest of my life. From hearing the blast of the Staten Island Ferry foghorn to feeling the medal being draped around my neck, every moment, every sensation, is etched into my memory.

You couldn’t even call me king of the hill. On the day, those honors really went to Shalane Flanagan, the queen of the hill and the first American woman to win the women’s division in forty years, and to the undisputed king, Meb Keflezighi, who finished his last ever professional marathon — his eleventh New York City Marathon — in eleventh place.

All of them were showered and well into their burgers and beers (or the professional equivalent thereof) by the time I wobbled across the finish line.

But I got to follow in their footsteps. Literally. As far as I am concerned, that meant my day, the whole experience, was the top of the heap. 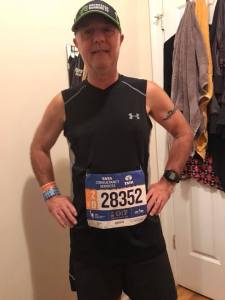 You only have to take one look at the course map to figure out why.

The race takes in all five boroughs of New York and finishes in Central Park. Logistically, the best way to do that is by starting in Staten Island at the foot of the Verrazano-Narrows Bridge.

Sure, it’s as impressive a start line as you’ll ever toe, a huge, graceful span with amazing views of the New York harbor and the southern tip of Manhattan.

But it’s also one of the most inaccessible places in the city, tucked away in the northeastern corner of Staten Island.

To get there on race morning, you have three choices. You can get up early and drive there, hoping your driver can drop you off before 6:45 when the bridge and the Staten Island Expressway are closed to traffic. You can get up earlier still, and take the bus to the start line from the New York Public Library in Midtown.

Or you can get up early, take the Staten Island Ferry and allow at least 90 minutes to get from the St. George Terminal to Fort Wadsworth, where the runner’s village is located.

It was the option I chose, but to be safe, that meant getting the 7:00 AM ferry. And even with Tessa driving me down to the terminal from our Air B&B on the Upper West Side, that still meant the alarm had to go off at 5:30.

Unsurprisingly, the ferry was packed — wall-to-wall runners from all over the globe. They chattered excitedly and jockeyed for positions on the ferry’s port side to take selfies with the Statue of Liberty.

But I didn’t join them.

I didn’t need to do the tourist thing. I’d ridden the ferry many times before (my son did his undergraduate degree at Wagner College, just minutes away from the start line). Instead, I sat silently on the ferry floor, conserving every piece of energy, knowing that I would need as much as possible in the next few hours.

At the St. George Terminal, we were greeting by the first — and only — cock up of the day. Something was going on with the shuttle buses, and many of us, myself included, stood in line for almost an hour before finally boarding one. Fortunately, the weather was cooperating and none of us were freezing. Still, I was beginning to question whether my decision to wear a singlet and a light jacket — to be ditched at the start line — was the right one.

The bus ride seemed to take forever, as did the walk from the drop off to the runner’s village. Security was everywhere — this was just a few days after the truck attack on lower Manhattan after all, which I’m sure added to everyone’s anxiety.

Despite the long journey and security checkpoints, though, I had plenty of time before I had to get into my corral. I hit the portapotties, ate my usual pre-race bagel with peanut butter and banana washed down with Gatorade, went through my usual stretching and warmup routine, and basically did everything I would normally do before any race.

But a quick walk around the massive runner’s village under the looming shadow of the Verrazano’s south tower was just one more reminder that this wasn’t just any race.

Eventually, it was time for me and the rest of the the orange wave to assemble in the assigned corrals, where I spend the final twenty minutes going back and forth about ditching my jacket.  The temperatures by the ocean were in the low forties, but they were predicted to rise as the race went on. Just before the short walk to the start line, however,  I threw it to the ground, wondering if I would regret the decision later.

Then, after a subdued version of “America the Beautiful,” a howitzer blast so powerful we could feel it as well as hear it, and the rousing brass intro of “New York, New York,” we were off. 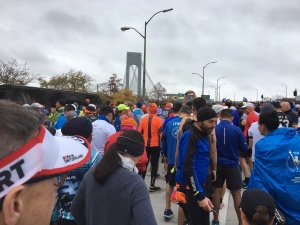 At this point, let me once and for all put an end to that most egregious of urban running myths.

No one on the bottom level of the Verrazano got a golden shower from a runner on the top level.

How do I know?

Because no one peed off the top level, least not in my wave. And I highly doubt in any other wave, either. Simply put, there were more portapotties at the start than in probably all of the races I’ve ever run combined. There were so many in the runner’s village and in the start corrals that if you couldn’t make it over the two-mile span of the bridge without peeing, as Addie says in Paper Moon, “You must have a bladder the size of a peanut!”

But I digress. Just like on race day, I have to press on.