As any runner will tell you, catching up always brings its own set of problems.

Especially when you’re really behind.

So it was with Coheed & Cambria and Mastodon, two bands that I love but that I had somewhat lost touch with through the years.

The last time I had caught either band live was almost six years ago, seeing Mastodon at the Saratoga Performing Arts Center on the 2013 Mayhem Festival, then Coheed a month later up the Thruway at Darien Lake on the Uproar Festival.

Being festival shows, neither performance was particularly memorable, especially when compared to some impressive shows I’d seen by both bands before.

I’d seen Coheed six times prior to this night, mostly notably in their old stomping grounds, the Starland Ballroom in New Jersey, in 2009, on an amazing night where they whipped up an already fanatical audience into a furious, frothing frenzy.

And while this was only the third time I’d seen Mastodon, one of those shows was at the Town Ballroom in Buffalo in November 2011, where we were treated to a sprawling, career-defining 22-song set in that great venue.

No. This was more about my interaction with their newer recorded material.

With Mastodon, that hasn’t been so hard, as they have only released two albums since 2013 — Once More Around the Sun, which didn’t resonate with me as much as last year’s excellent Emperor of Sand has done.

But for Coheed, my involvement in their back catalog is a little more complex.

Truthfully, only a handful of songs they have released since I saw that first show in 2009 have stood out, and I have found the material on the subsequent five albums to be less adventurous than their earlier material. The first four albums showed them occupying a unique space between punchy, punky edginess and expansive progginess, with Travis Stever’s inventive, meandering guitar lines providing a great counterpoint to Claudio Sanchez’s hard-edged synchopated riffs. But beginning with 2009’s Year of the Black Rainbow, they seemed to ditch that quirky signature sound for more streamlined and compact arrangements that lack the musical innovation of the songs that came before.

Still, I found the double bill to be irresistible enough to make a return trip to the Jersey shore, especially as Mastodon were to perform the whole of their brilliant 2009 album Crack the Skye.

They did not disappoint.

Given the Herculean task of playing their magnum opus with the sun behind them and shining directly into the audience’s eyes, 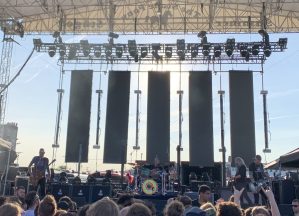 distracting attentions while reducing the impact of their light show,

the band delivered a flawless performance of the epic album — no small feat considering the number of instrumental overdubs used on the original recording. 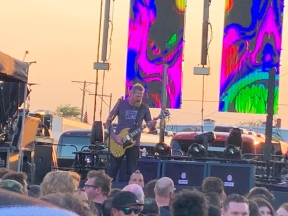 From “Oblivion” to “The Last Baron,” the band moved effortlessly through the intricate time changes and dynamic arrangements without missing a note. (OK — so, yes, there were backing tapes. But in this day and age, that’s kind of a given.) And hearing “The Czar” live for the first time in context was a little like watching Leonardo da Vinci paint The Mona Lisa — well, maybe not quite that profound, but certainly as mesmerizing.

After a brief but satisfying four-song encore, Mastodon gave up the stage to Coheed, who were able to take immediate advantage of the darkening sky to put on a stunning visual display.

The music, though, seemed to go in and out of focus. With the setlist heavily weighted in favor of the band’s latest album, Vaxis – Act I: The Unheavenly Creatures, the nuggets of older material scattered through the set seemed to fare the best, especially “In Keeping Secrets” and “A Favor House Atlantic,” with their built-in moments of audience participation, and a slower-than-usual “Delirium Trigger” into an anthemic “No World for Tomorrow.”

It’s not that the new material is bad.

But maybe this was one of those moments when my own bias skewed toward the music they were playing at my entry point into their history.

Nowhere was that contrast highlighted more than in the encore. Had I heard a song like “The Pavilion (A Long Way Back)” around the time “Welcome Home” had been released, perhaps I would have been drawn more deeply to it. As it was in this particular outing, the older, iconic final song outshone its predecessor in the set like a thousand suns.

Even so, Coheed’s show contained a lot of positives, including watching the ever-entertaining Claudio, especially when he performed a couple of the new songs without a guitar, and seeing drummer Josh Eppard at the top of his game.

In fact, I can’t remember many shows in the past 35 years that featured two better drummers than Eppard and Mastodon’s Rochester-lad-made-good Brann Dailor.

So was this a case of an epic audience fail?

Perhaps. And if so, in fairness, it wasn’t just me. Aside from the usual Coheed crazies at the front, the crowd where we were standing a third of the way back from the stage was fairly quiet, reacting to the occasion when the music demanded but ultimately watching the evening unfold somewhat passively. 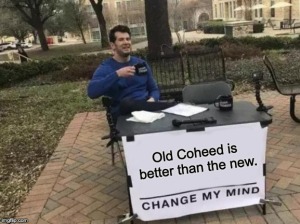