#runstreak day 475: The End of the Streak and a European Runcation (Photoessay)

On April 20, at around 5:30 in the evening, I finished a lazy two-mile run around the neighborhood.

It was an unremarkable way to end a remarkable sequence. A 475-day #runstreak, encompassing 2,285.52 total running miles, had come to an end.

I neither celebrated nor mourned.

I had made my mind up a couple of months earlier that this would be the end of the streak once I booked the flights for an amazing two-week vacation in Europe. I simply did not want to be burdened with running every day while we were gone. A few runs here and there would be perfect, but I did not want running to be the focus of the whole trip.

Plus, given the way my body had been over the last few months, I decided now would be as good a time as any to give it a much-needed break. I wanted the next part of this running journey to be pain free and, more than anything, just plain fun.

And that’s the way it started in Europe, with five short but memorable runs in three different countries.

“I’ve got a route for you,” said my brother, who has never really grasped the idea of my running. “It’s only a couple of miles and only has one small hill,” he said,

As it turned out, it was neither. I wanted something nice and easy after almost a week off, something quintessentially English, with hedgerows and sheep grazing in green fields. 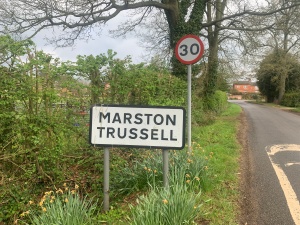 Instead, I got a bloody great hill (OK — so it was a 5% grade over half a mile, but that was more than I wanted to handle) and more than a couple of miles (more like five, but who’s counting?).

But at least I got the sheep, the hedgerows, and the fields.

Sheep grazing near Marston Trussell. Note the ridges in the field, evidence of strip farming during medieval times.

One of the fun things about being a runner in a new city is exploring your surroundings on foot. Our AirBnB just happened to be near the Benfica football stadium, and after a circuitous route around a neighborhood, I finally found it.

I had a quick run around the concourse, past the statue of their most famous player, Eusébio da Silva Ferreira (better known by his first name, as all great players should be).

Then it was selfie time

followed by a run around a local park to finish up.

Another section of the Passeio Maritimo de Oeiras

yet another fort (with a strategically placed drinking fountain),

and to a spectacular view of an epic bridge.

The kind of run that makes you rearrange your bucket list in the hope that, one day, you will be back to do it again.

For my first foray on French soil, I headed south from our AirBnB in the Old Town of Antibes for a little over two miles, hugging the coast road toward the Cap d’Antibes 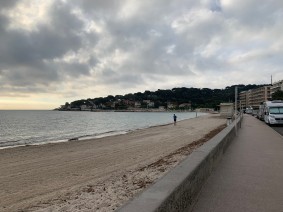 deserted due to the overcast skies and the still somewhat chilly spring temperatures, and a small marina 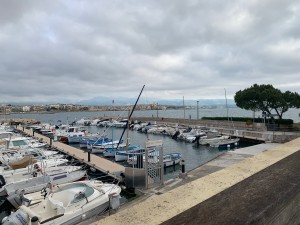 before rounding the amusingly named Pointe Bacon, where I took in some spectacular views of the distant Préalpes d’Azur (sadly, none of my iPhone pictures could do them justice).

On the Boulevard de Bacon

Then, I retraced my steps back into the Old Town to finish up.

The next day, I set out in the opposite direction heading toward Nice. 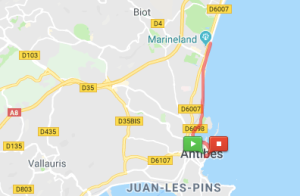 Once again, I began in the Old Town, 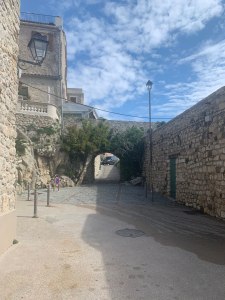 but this time, I headed out in the opposite direction along the Promenade Amiral de Grasse

past the Picasso Museum and the Cathedral

Château Grimaldi, now the Musée Picasso, on the left, with the Cathédrale Notre-Dame-de-la-Platea d’Antibes on the right

before circling the Antibes Harbor and the multimillion dollar yachts docked in Port Vauban. 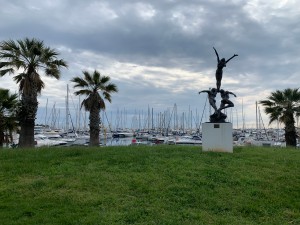 Inspiration statue with Port Vauban in the background

I continued around Fort Carré

enjoying the warm spring breeze coming off the Mediterranean and the beautiful vista in front of me.

After a quick selfie,

The Flat-Footed Fox on the Route de Bord du Mer

the sun finally came out, and it was time to head back to Antibes, over the Brague River

then back into the Old Town to finish up. 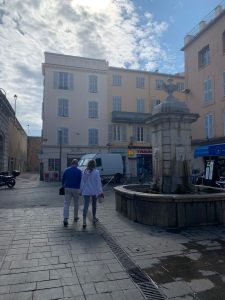 Five runs. Five unique experiences that were a perfect interlude between one ambitious chapter in my running life and another — an attempt to beat my 77-minute PR to celebrate my tenth anniversary of running the Boilermaker.

But that’s a tale for another day.

I write about running, music and spirituality.
View all posts by Bruce Pegg →
This entry was posted in #runstreak, The Flat-Footed Fox and tagged #runstreak, Antibes, Boilermaker, Lisboa, long-distance running, Marston Trussell, runcation. Bookmark the permalink.