The last time I saw the Mighty Maiden, in Toronto on their 2017 Book of Souls tour, I marveled at the energy they still generated on stage after delivering almost 40 years of uncompromising in-your-face metal to the masses.

This time, though, catching up with Eddie and the boys wasn’t quite so satisfying.

Which was strange, as all the ingredients for a truly epic show were all there. From the dramatic “Aces High” opener, with a full-scale inflatable Spitfire flying above the stage, 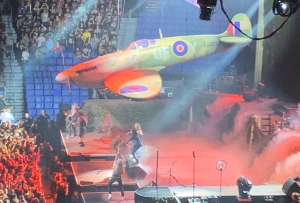 through a deep-cut, career-defining playlist, including “The Clansman” and “Sign of the Cross” from the late 90s Blaze Bayley incarnation of the band, the show was, as the name of the tour rightly boasted, the Legacy of the Beast.

But this time around, despite the best efforts of Energizer Bunny Janick Gers, the band struggled at times to find a spark. And there were plenty of technical problems scattered throughout the night, which certainly didn’t help matters. Sound problems dulled the impact of the opening three numbers, while flamethrowers strapped to Bruce Dickinson’s arms failed to ignite during “Flight of Icarus,” dulling the showpiece song’s impact.

But this was Maiden, and Maiden shows are always pure theater, with Bruce changing costumes more times than any other show I’ve seen to emphasis the point. No LED screens and prerecorded tapes here. Just inflatable props, 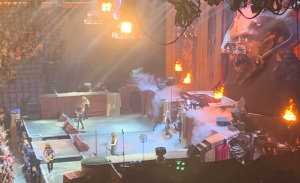 pyros aplenty, and humans delivering an honest rock show, warts and all. And once the sound was sorted and the band kicked into full gear, the punters finally started getting their money’s worth.

“The Clansman” surprisingly provided the first genuine highlight of the night, while the combination punch of the surprising “For the Greater Good of God” from A Matter of Life and Death and Brave New World’s “The Wicker Man” added some real meat to the middle of the set.

As always, though, it was the tried-and-true favorites that delivered in the end, albeit with some new twists. “Fear of the Dark,” for example, was elevated from being a mere singalong to a full-on Gothic mini-opera, with Bruce dressed in the flowing cloak and bird mask of a plague doctor costume and carrying a luminous green lantern. And the traditional encore of  “Hallowed Be Thy Name” made a much-welcomed return after being consigned to plagiarism purgatory on the last tour. Unlike previous versions of the song, however, Bruce made it into a more brooding, introspective piece, opting to swing a noose dangling from the rafters for most of the song rather than leap about like a madman from the catwalk that surrounded the band as he has in previous tours.

Maybe the indefatigable band is finally slowing down. Maybe it was just a bad night at the office. Maybe it was a case of a Buffalo crowd being just a little too flat on a school night. Whatever the case, Msrs. Harris and co. still can’t be accused of phoning it in. The Beast that is Iron Maiden was, thankfully, still a Beast at the end of the proceedings.

Even on a sub-par Tuesday.

I write about running, music and spirituality.
View all posts by Bruce Pegg →
This entry was posted in Reviews, Thoughts from the Guv'nor and tagged Bruce Dickinson, Iron Maiden, Janick Gers, Legacy of the Beast, Steve Harris. Bookmark the permalink.