#runstreak Day 420: That Was the Week That Was

I’ve had to endure some tough weeks on the #runstreak. But they haven’t been much tougher than this one.

Monday I faced snow, the traditional Northeast runners’ winter adversary. Sure, it was only four inches, and I was armed with my cleats and my usual winter wardrobe. But as always, it limited my route and slowed my pace. I managed a measly 3.3 miles at a sluggish 9:45 min/mile.

“Oh well,” I said to myself. “There’s always tomorrow.”

Tuesday, the foe was within me. Tessa and I were hosting her daughter and two adorable granddaughters, one of whom had brought with her a nasty little downstate norovirus, which had attacked everyone in the house one by one.

I was the last to be picked off. Diarrhea. Light fever. A brief episode of vomiting. Not the worse thing I’ve ever endured, but enough to wipe me out for a day and leave me with just enough energy for the bare minimum #runstreak mileage of 1.1 miles, again at a glacial 9:49 min/mile.

Wednesday, I felt much better and challenged myself to seven miles with hills. The norovirus had other ideas. On the fourth and last hill, my body went on strike and all thought of finishing the run died right there. The net mileage for the run, 4.5, and the pace, 10 min/miles, weren’t horrible. But my mind was full of dread on the long last mile home. With the New York Half Marathon now just three-and-a-half weeks away, 25 days to finish training for it just didn’t seem enough.

On Thursday, for once, that mantra seemed to hold true. Five miles at an 8:45 pace restored a little faith. Better still, the left glute/hamstring problems seemed to now be a thing of the past — all the core work I am now doing on a regular basis seems to be paying off. Now, I thought, a longish eight/ten mile run would end the week on a positive note.

Friday bought the start of another energy-draining illness in the form of a virulent head cold that stretched into Saturday. I suspect the same granddaughter that had the norovirus had generously given it to me as well, but I’ll be a good grandpa and won’t say anything.

Sunday, it almost did, but not quite. Mother Nature had one last trick up her sleeve in the guise of 40 mph wind gusts that arrived with the ferocity of a runaway train four miles into a proposed seven miler. Every time I turned into the wind, it was like I was running in place. Maybe on another day when I was in full health, the energy might have been there to fight the conditions and finish what I had set out to accomplish. But after six, I just did not have the energy to struggle any more, though I could take some small comfort in the fact that I had at least managed to finish the hills that had defeated me on Wednesday.

Just 26 lousy miles for the week. 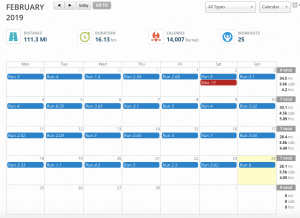 I was well on the way to what turned out to be my third fastest half marathon ever.

There’s still still enough time. There’s still some very realistic hope that I can do as well this year.  But I can’t afford any more weeks like this one.

I write about running, music and spirituality.
View all posts by Bruce Pegg →
This entry was posted in #runstreak, The Flat-Footed Fox and tagged #runstreak, long-distance running, United Airlines New York City Half Marathon. Bookmark the permalink.