It wasn’t the way I wanted to finish my 2016 running season. But this year’s Marine Corps Marathon ended up being an appropriate conclusion to such a frustrating, confusing and trying year. As I sit here, reflecting upon and analyzing the run the way I always do, I am still trying to figure out what my ninth marathon and this whole running year in general have been trying to tell me. All I can say for sure right now, with winter just around the corner, is at least I have some time to figure it out.

Nothing summed up that frustration more than the drive down on Friday. Learning from last-year’s lesson, Tessa and I left a day early, hoping to check into the hotel and get to the race expo that night, freeing up Saturday for a lie-in, some relaxing sightseeing, a nap and a carb load before Sunday’s main event. But a malfunctioning GPS diverted us through rush-hour traffic in downtown Washington, adding more than two hours onto our trip time. We finally found the hotel, checked in and got to the expo with minutes to spare.

Mission accomplished. For the time being.

Saturday, at least, went somewhat according to plan, and we enjoyed the anticipated lie-in, a trip to the National Zoo, the nap and the carb load. As I went to bed, my nerves finally went into remission, and I was even feeling optimistic that Sunday would go my way. 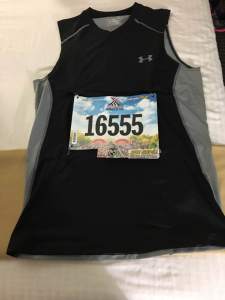 But D.C. Metro transportation had other ideas.

The game plan, duly rehearsed the day before, was to drive fifteen minutes to the Ballston-MU station, park the car, then take the bus to Pentagon Station and walk to the start line. The buses, according to the Metro website, would leave every ten minutes starting at 5:00 AM–our best choice given that the subway, unlike previous years, would not open until 7:00.

We arrived at 6:00, plenty early enough, we reasoned, for the thirty minute journey to Pentagon Station and the ensuing twenty-minute walk to the start line for the 7:55 AM gun.

But when we got there, the math was against us: too many people and not enough buses equaled a line that barely moved for almost an hour. Plan B–a drive to the start line–was out of the question. There was simply no parking for miles around. So at 7:00, Plan C went into effect.

The minute the subway opened, we ran down the escalator and embarked on the same journey I had taken the year before. Only this time, it was two hours later, and the chances of even getting to Pentagon Station before gun time, let alone to the start line itself, were slim and none. The tantalizing glimpse of the runners at the start line as our train sped through the Arlington Station confirmed it.

We were late, and there was nothing we could do about it.

Walk. Check point. Portapotty. Stretches. More walking. After a kiss and a hug from Tessa, I finally crossed the start line 30 minutes after gun time. Thankfully, the organizers had anticipated that there would be a lot of us in this situation and had taken the decision to keep the start open for an hour. But I was stressed and out of my comfort zone. And there was still 26.2 miles of running ahead of me.

For the first few miles, the late start didn’t make much difference. I hit the expected human traffic as I made my way through the slower runners, but the roads were wide enough that I was able to make my way around the throngs and keep a fairly steady 9:30 pace. But just before the first 5K split, the course hit its first choke point, and I found myself weaving and shuffling around my fellow runners as we made the short descent down 19th Road and onto Spout Run Parkway.

We spread out again when we hit the Frances Scott Key Bridge, and all was well as we made our way through Georgetown. But the scene played itself out to a far worse degree when we hit the Rock Creek and Potomac Parkway, about six miles in. I found myself being jammed in behind teams running four or five abreast across the course, bumping into runners stopping dead in the middle of the road, and more than once I had to jump up onto a curb or along an uneven grass strip in order to keep my pace.

I was now in the middle of the great crowd of runners I witnessed last year from a much better vantage point. Thankfully, though, I remembered the course well enough to know that we would spread out again just before we ran past the Kennedy Center. Sure enough, I eventually found some breathing room and was able to just concentrate on keeping my pace and looking out for Tessa.

We missed our first rendezvous point around the Arlington Bridge, so I continued on through the ever-emotional wear blue Mile to the half-way point, where I felt the first twinges of fatigue. They were easy enough to shrug off, and I started the run around the National Mall feeling pretty good. Unlike last year, my slower pace and familiarity with the course allowed me to sit back a little and really enjoy my surroundings, even though Tessa and I missed each other at every viewing spot we had arranged.

At mile sixteen, I walked, but I immediately picked myself up for the run past the Capitol to the 14th Street bridge. There, just three miles later, close to noon and with the temperature now hitting 80 degrees, my body finally gave in and I began the last seven walk-run-walk-shuffle-walk-run-rinse-repeat miles around the Pentagon parking lot, around Crystal City, back around the Pentagon and up Route 110 toward Arlington Cemetary.

It was all depressingly familiar.

About a mile out, I finally got a second wind that eventually propelled me up the short, steep incline up Marshall Drive and down the finish chute, with the emotional image of the Iwo Jima monument in the background. I had finished, but it hadn’t been pretty.

Somewhere around mile twenty-four, I overheard two runners, both about my age, talking about this being their last marathon. I turned to them and agreed–unless I got into New York in 2017, I was probably going to join them. But such words are often said, but not meant, in the literal and metaphorical heat of a marathon.

Today, almost two weeks after my second Marine Corps, I am sure I will run marathons again next year and for as long as I am physically able. I am already making plans to do so. But I know that things have to change–everything that worked for me last year did not work this year. As I said to Tessa, beer in hand at the conclusion of the day’s exertions, I can’t go through another Hanson’s Training, with all its intensity and time commitments, and have such poor results to show for it at the end. Either I become a social runner, and find another program that allows me to get around effortlessly at a 10 min/mile pace without such an exhausting weekly commitment, or I find a program of equal intensity to Hanson’s that gets me closer to my Boston qualifying goal and I commit to it.

Changes have to be made across the board, and with the snowflakes poised to fall once again, it’s time to re-evaluate my training, my nutrition, my inspiration, my rationale.

On a final note, The Flat-Footed Fox would like to congratulate the wonderful Shannon Rhodes for winning the MCM Predictor Challenge! A long-time member of Team Love Nugget, Shannon came closest of all the participants to predicting my time in the race. Per her request, a $50 donation to The Michael J. Fox Foundation (who else!) will be made on her behalf.