I was even more of a nervous nelly than usual before the United Airlines NYC Half, my first race of 2018.

First, there were the shoes. After several years running in my trusty New Balance 860s (not counting a year-long affair with some Brooks Adrenaline GTSs), I decided it was time for another fitting. So, I headed down to the Rochester Running Company, where my good friend Jonathan Griffiths put me into a pair of 361 Sensation 3s.

But due to the puny size of my feet, Jonathan had to special order the shoes, and I didn’t receive them until a week before the race. That meant only being able to put a few, inconclusive miles on them before the big day.

Then, there were the GI problems, which seemed to be more prevalent than ever. It seems like I played with my diet endlessly, and just when I thought I had it nailed down, the stomach cramping hit and it was back to square one. It even hit on my first night in Manhattan, when a cup of strong coffee and two slices of pizza were all that it took to do me in for the night.

And then there were the questions about how the #runstreak would affect me. I had been clocking some pretty hefty mileage prior to heading back to the Big Apple, but only one long run of ten miles. I knew it would be enough to get me around. But I didn’t know how it would affect my performance — positively or negatively — on the day.

Work and travel commitments meant getting up at stupid o’clock and running a brief two miles on a freezing cold, pitch black Rochester Friday morning. As I headed out the door, I consoled myself by thinking that it wouldn’t be too long before I would be pissing and moaning about the heat instead.

After a long trip down to the City and the infamous coffee and pizza incident the night before, a quick three-mile dress rehearsal run around Central Park was just perfect. I pulled on the outfit I planned to wear the following day (the forecast called for carbon-copy conditions), and in very chilly temps but under bright, sunny skies  I made it round the reservoir and down the last half mile of the course feeling very optimistic.

All that remained was to replace the running hat with a beanie and sunglasses and pin the bib on.

Oh, and to figure out how the hell to get to the start line.

My old friend and host for the weekend, Dan Callahan, knows the New York subway system like the back of his hand. Even so, factoring in construction and Sunday service, it took us both the best part of an hour to work out the optimal route to be in my start corral by 6:30. 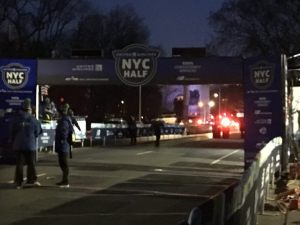 I dutifully made my way to the staging area figuring all I had to do now was to stay warm for an hour. Even though I didn’t bring any extra clothing, I stayed warm through my stretches, shakeout run, and potty call. I was even warm after 7:00 when the sun finally rose and I joined the throngs in the J corral to ride out the final half hour

Except, it wasn’t going to be a half hour. We stayed rooted in our corral as the race officials let each corral go one by one. J corral didn’t cross the start mat until 7:55, by which time I was a shaking, shivering wreck.

As we began our long, slow march to the start mat, I wondered how all this was going to play out on the course that lay ahead. Yet, the minute I started to run, it was like nothing had happened. I wasn’t cold. The sneakers felt great. There were no signs of any GI problems at all. I was running, and it all felt easy and really, really good.

Of course, the first mile on Flatbush Avenue and past the Barclays Center was downhill, so it was going to feel easy. But the climb up the Manhattan Bridge on ramp felt just as good, and the incredible view of the Brooklyn Bridge and the skyscrapers of downtown Manhattan in the bright morning sunshine that awaited us when we made it to the span were more than enough to dispel any final nerves I may have had by mile three.

They were the first of many special moments that we all experienced on what turned out to be an amazing morning.

After a quick turnaround through Chinatown and the Lower East Side, it was onto the East Side Highway and the surreal experience of running on normally busy northbound lanes strangely absent of vehicles for the moment. There were more spectacular views of Brooklyn, the East River and the Empire State and United Nations buildings. Then, before I knew it, we were on 42nd Street, running up the slight incline past the Chrysler Building, Grand Central Station, and the New York Public Library before a quick, 90-degree right turn took us smack dab into the middle of Times Square.

There aren’t many times when I have wished a race photographer would capture my expression during a run — most of the time when the shutter clicks, I look like a clueless zombie in the process of dropping dead or an escaped inmate being chased back to the local lunatic asylum. But had someone captured my image right then, as I cruised through the concrete canyon while staring up at the LED billboards with a smile as big as all Manhattan, I swear it would easily have made the cover of the next Runner’s World.

But all too quickly, the touristy stuff came to an end, and after the quick and easy climb up 7th Avenue and past Carnegie Hall, we entered Central Park. Now it was time to put my runner’s beanie back on and deal with the nasty rollers that I had run in the opposite direction only four months earlier. I had been saving myself for this particular moment of sneaker-to-asphalt combat, and as I watched other runners fall off the pace, I knew I had made the right decision.

The Cat Hill climb from just south of the Metropolitan Museum to the north end of the reservoir seemed to go on forever, and after we made the long looping turn at the 102nd Cutoff, it was time to take on the Three Sisters, a series of small rollers that took up the last mile and the last ounces of energy. At the top of the final one, there was my friend Dan and my son Will to high-five me (though, in Dan’s case, the high five ended up being a hilarious smack on the head), then it was a mad downhill dash for a 1:52:03 finish — my third fastest time over the distance, and just 3-1/2 minutes off my half marathon PR.

The New York City Marathon may ooze more energy, atmosphere, prestige and athletic swagger, I thought, as I sipped on my beer and tucked into my burger 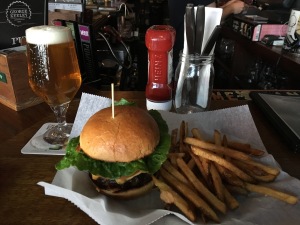 over at George Kealey‘s with Will and Dan after the race.

But the New York City Half was picture-postcard perfect, easily the match of its more famous older brother, and one heckuva way to keep the #runstreak alive.

After a one-mile recovery run on Monday — my shortest of the whole #runstreak — it was back to it. I’m now at Day 83, with over 414 miles logged since January 1. My life is going to be complex in the next few weeks, with work commitments, a certification exam, and a much-needed vacation lying in wait to overturn this whole enterprise. But I am going to give it my best shot, as this is turning out to be the ideal preparation for my next challenge: a return to Burlington for my fourth Vermont City Marathon.

2 Responses to #runstreak Days 76-78: The New York City Half Marathon